After a spur of the moment decision to go camping for one night, my husband and I spent the evening in a first-come, first-serve car camping site in Colonial Creek campground in the North Cascades National Park.  The next morning we enjoyed our dutch oven breakfast and instant coffee while listening to the sounds of chirping birds and barking squirrels alongside Diablo Lake.  After breaking down camp we headed to the North Cascades Visitors Center to get a suggestion on a day hike in the park as we headed southwest back towards Seattle.  The park ranger we spoke to suggested a hike she had taken with her mother less than a week prior describing vast views of glaciers and crossing meadow fields full of blooming flowers.  We decided this was the hike to make since the ranger had hinted that if her mother could make the hike with two easy snow fields to cross, then we could easily do so as well.

After about an hours drive we arrived at the trail-head and started our ascent towards Cascade Pass around 2:00 pm.  We met a couple at the trail-head who were starting their first day of a week long trek to Stehekin and back on their honeymoon – they had just been married two days earlier!  I had to snap a shot of their packs showing “Just Married” attached to their backs. 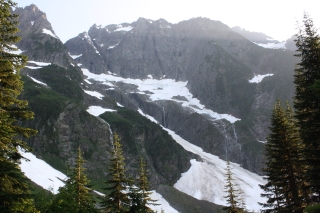 The mountainside covered with cascades 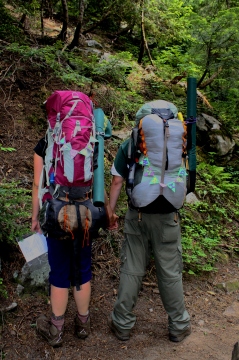 As soon as our boots hit the trail it slowly started climbing upwards, switchback after switchback meandering through the thick forest.  When travelling along the trail we could hear the sounds of the many cascades flowing from the glaciers and snow melting from above. As we gradually climbed up, the first few miles of the trail were not very difficult as it had a continually slow and steady incline.  At one point we tried to step aside to allow a few hikers to pass on their way down, but they insisted we go ahead since we still had “fresh legs.”  Once we reached to the top, we starting hiking along the ridge which became a easier, flatter hike.  It was at this point we had to cross a few snow fields where I admittedly had a difficult time overcoming anxieties I have about hiking in the snow.  Once I took the last leap from the snow onto solid ground again, we had arrived at the top of Cascade Pass where I instantly realized how worth the trek was.  The views in every direction were breathtaking looking through what appeared to be endless valleys. 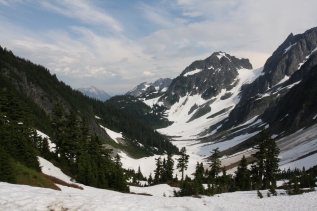 The view from Cascade Pass looking into the valley 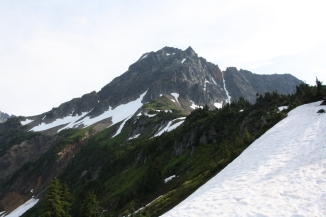 The view from Cascade Pass looking back towards the ridge

The sun setting behind the North Cascades

At the top of the pass, we reconnected with the honeymooners sharing stories of our adventures in the Pacific Northwest.  After a short rest we wished our new friends good luck, and started our decent back down the trail letting gravity assist us along the way.  While going down has it’s own challenges, we no longer had fresh legs and our muscles welcomed the relief.  Just as the sun started to dip below the glacier topped mountain peaks, my husband and I arrived at the trail-head around 7:30 pm.