With the weather looking more like spring in the Pacific Northwest, my husband and I decided to head over to the Olympics for a day hike.  We woke up early enough to make the short drive to Edmonds just in time to catch the ferry and may our way across the Puget Sound.  As the ferry headed west thick clouds hung over the Olympic mountains, but as we looked back to the east a panoramic view showed blue skies surrounding the Cascades.  The one hour drive around Hood Canal towards the eastern Olympics had our car winding through small patches of thick fog under cloudy skies.  As we made our way into the glacier carved valley alongside the Lower Big Quilcene River the grey skies disappeared and finally let the sunshine in.

The parking lot for the Lower Big Quilcene River Trail # 833 had only one other car as we arrived.  With plans to make our return trip a trial run we packed light bringing only the essentials.  The trail begins with a slight descent heading down towards the Lower Big Quilcene River.  Right away we notice the trail is very well kept and appears to have recently been worked on.  It has several river and stream crossings including what appeared to be very sturdy and recently built bridges.  As we hiked the sun spent much of its time hiding behind the ridgeline to the south of the valley.  At times the ridge would dip down and allow the sun peak down into the valley along the trail.  Once we made our way down to the riverside, the trails makes its way along the river slowly climbing into the valley.  After 2.6 miles we crossed through Bark Shanty Camp with a few backpackers camp sites along the river.  We continued our hike heading up towards Camp Jolley with plans to stop for lunch upon arrival.  We found a few logs with views of the Quilcene River allowing us to rest and refuel for our return trip.

With the afternoon sun still trying to make its way into the valley, we headed back down the trail towards the parking lot.  After fifteen minutes of hiking, we stopped to prepare for a trail run for the remaining four miles.  This was a perfect trail for running with most of the way going slightly downhill.  The trail headed upwards only a few times and when it did it was hardly noticeable.  We made our way running up and down winding along the Lower Big Quilcene River with bursts of sunlight when the ridgeline dipped low enough.  The parking lot had several cars at the trailhead as we arrived mid afternoon. 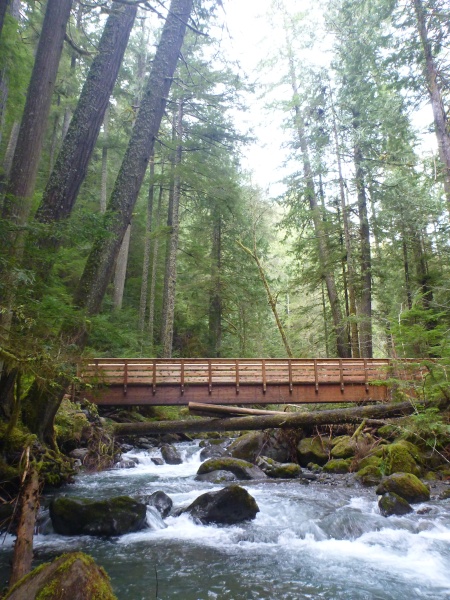 Heading east towards the Puget Sound with the sun was still making its appearance, we decided to skip the ferry ride and take the small road trip home.  We headed south towards the Tacoma Narrows bridge with Mount Rainier dominating the landscape to the east.  Our journey ended as we arrived home just as the sun made its final appearance for the day.