For Memorial Day weekend, my friends and I decided to head over to Olympic National Park for a few nights of car camping and one night of wilderness backpacking.  On Thursday, one of our group members headed to Lake Crescent campground to get a head start on the holiday crowd and grab a first-come, first-serve site.  My husband and I joined our friend later that evening and quickly set up camp in the dark, rainy night.

We woke up the following morning to more rain, and hurriedly set up a canopy over our picnic area.  With hopes of things drying out by that afternoon, the three of us headed to the ranger station in Port Angeles to get our wilderness permits for Shi Shi Beach the following day.  After seeing the great weather at Hurricane Ridge from the webcam in the ranger’s station, we decided to drive up the mountain for some day hiking.  It was a great morning to enjoy the views from Hurricane Ridge and watch the wildlife along the trails. 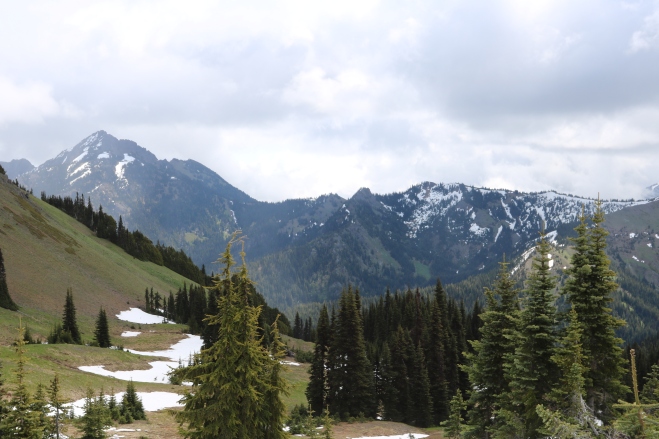 A view of the Olympic Mountains from Hurricane Ridge, Olympic National Park, WA 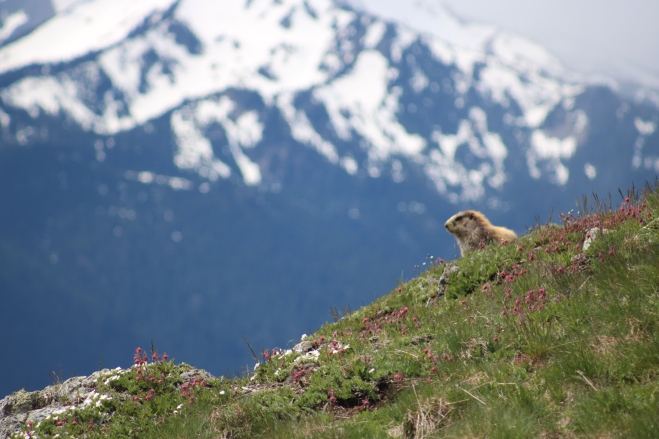 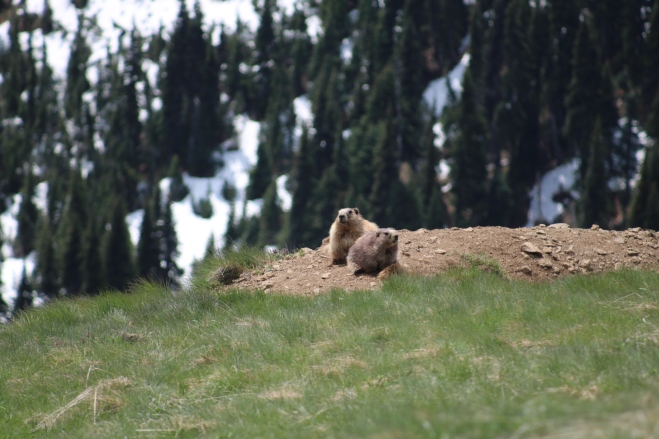 A deer running quickly to get over the snow, Hurricane Ridge, Olympic National Park, WA

A deer checking out the view from Hurricane Ridge, Olympic National Park, WA

After a great morning hike, we headed down to Port Angeles for lunch before making the drive back to our campsite at Lake Crescent.  Once we arrived back at the campground, the weather had not changed since the time we left that morning.  Even though it was still raining, we were happy to see our picnic area had dried under the canopy.  With several hours of daylight left, we decided to explore the hiking trails around the lake.  After a short drive to the end of camp David, Jr. Road, the trailhead to the Spruce Railroad Trail came into view.  Our car was the only one parked at the trailhead that evening, and we were the only people on the trail the entire hike.  The hike is a beautiful trek along the northern shore of Lake Crescent with small sightings of the sun trying to break through the clouds.  A few miles into the hike, we were excited to find a tunnel to explore.

Late that evening, the remaining members of our group showed up and set up their tents in the rain just as we had the previous evening.  Once again, it rained all throughout the night as we tried to stay dry and warm inside the comfort of our tents.  We woke up to another rainy morning, where we huddled under the canopy as a group for breakfast.

Two of the members of our group had never been backpacking, and I was so excited to share my passion with them.  When planning this trip, we decided to head out for one night and test out their new gear and experience an evening in the wilderness.  The four of us spent the morning huddled under the canopy trying to keep dry while stuffing our packs with the essential gear for an overnighter on Shi Shi Beach.  We hopped in the car and headed towards the coast in the pouring rain.  When we arrived at Neah Bay to get our permits from the Makah Cultural & Research Center, it was raining harder than it had all weekend.  After the trip, every member of our group admitted at that point we were all secretly hoping the others would back out because of the terrible weather.  Instead of confessing our fears and giving up, we put on our happy faces and hit the trail.  The hike is was very muddy as expected, and it was funny to watch day hikers try to avoid walking in the muddiest parts of the trail.  I felt like a kid again tromping down the trail in the pouring rain. 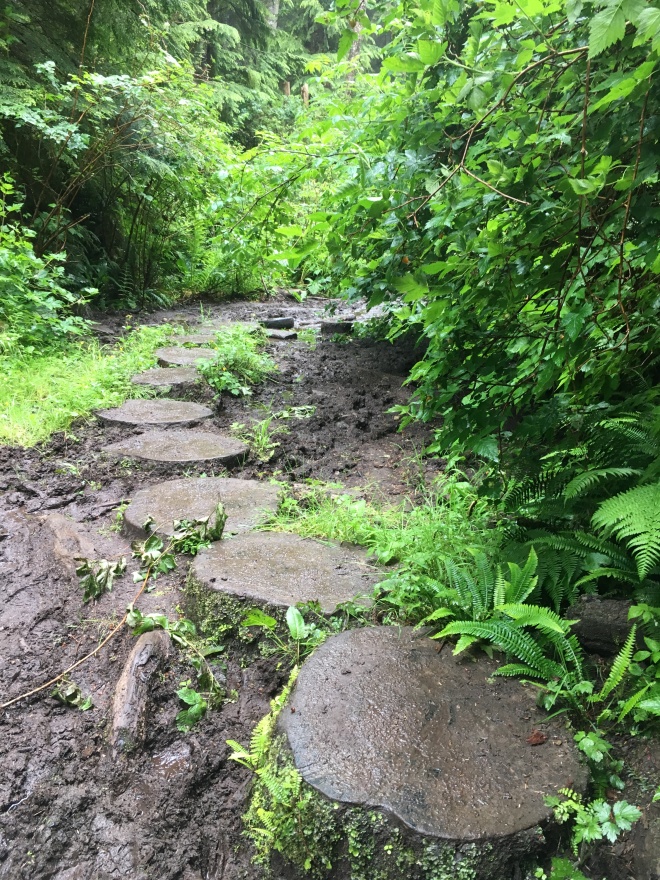 As we neared the beach, the most difficult part of the hike appeared before me.  As the rain and sweat poured down my face, I feared the steep section of the trail in front of me.  In spite of my slight fear of heights, I made my way down the trail repeating to myself, “I can do this, I can do this, I can do this.”  It wasn’t long until we reached the bottom and I felt a huge sense of relief.  Now it was time to head towards the Point of the Arches and find a suitable camping spot.  We realized quickly that even though we desired a camping spot in the woods seeking protection from the elements, the only spots available were on the beach.  For the first time since we drove into Olympic Mountains days ago, the clouds started to dissipate and the rain disappeared.  We found a great spot amongst the driftwood to set up camp near a small creek to use as a water source.  Life was good. 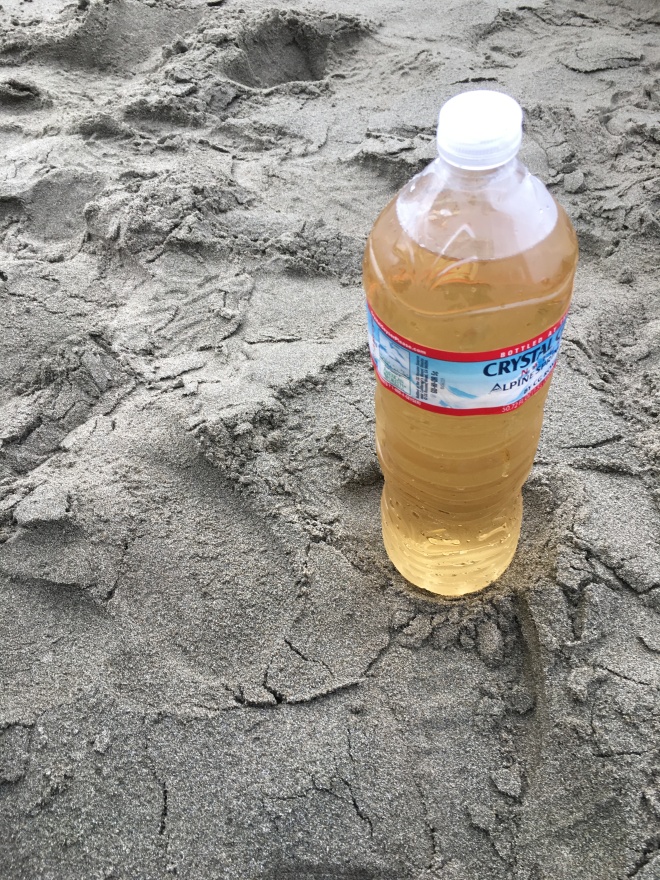 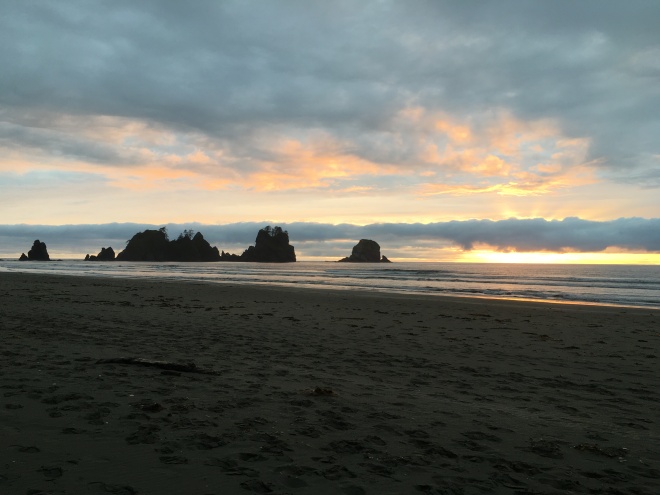 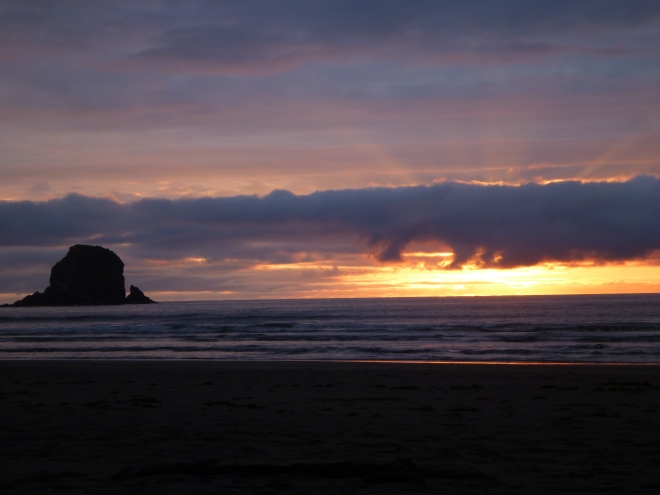 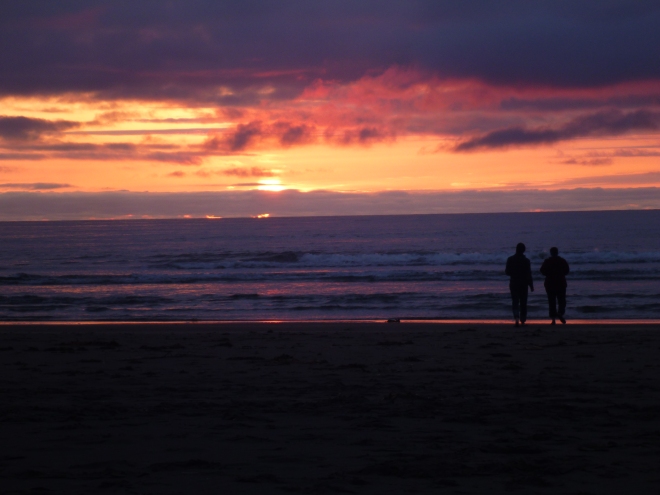 Besides one small rain shower in the early evening hours, the rain never returned.  We slept soundly on the beach and woke up to sunny skies.  After packing up, we were excited to  explore the tides pools surrounding Point of the Arches during low tide.  I have never seen more sea stars and anemones in my life! 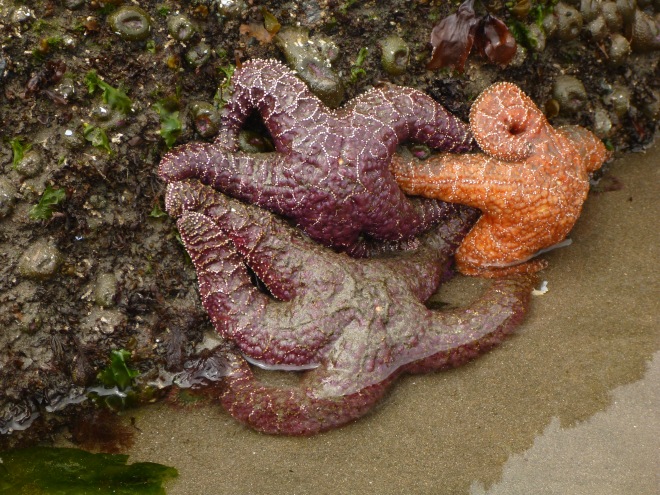 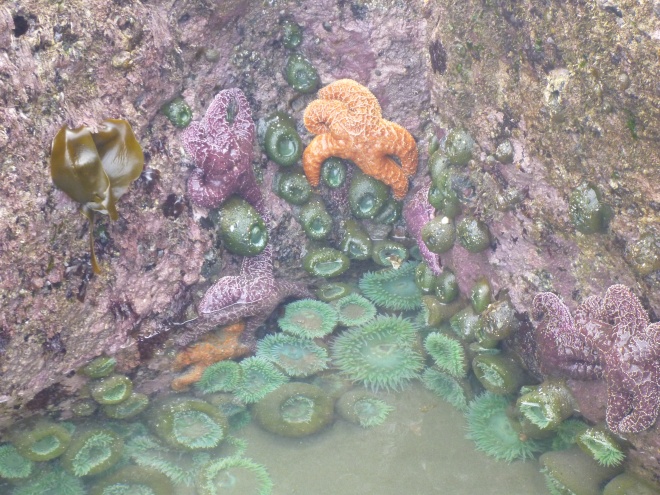 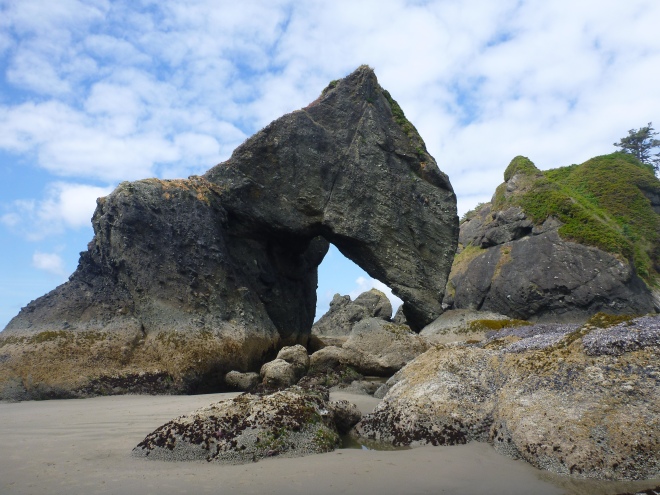 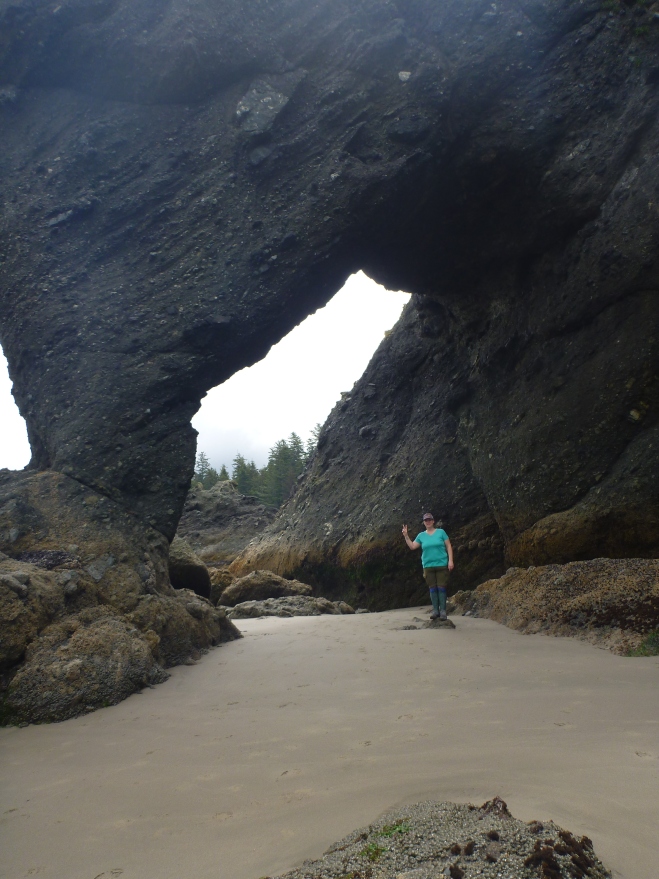 After a quick lunch among the driftwood on the beach, we made our way back towards the trailhead.  Unlike the day before, we were now protecting ourselves from sunburn!  The part of the hike that pushed my fear of heights the day before, seemed much easier going up (and the fact that it was dry also helped.)  As we hiked along, my friends discussed future backpacking plans and I knew I had given them a great first overnight wilderness experience.

We arrived back at our campsite at Lake Crescent happy to find our area warm and dry.  All of the luxuries of car camping were at our fingertips once again.  We enjoyed the company of good friends by a warm fire stuffing our faces with s’mores and beers.  I slept better that evening than I had the entire trip.  The next morning the sky was still filled with sunshine, allowing us to dry out all of our wet gear before stuffing it into the car.  It’s always a little sad to pack up and leave your camping home away from home, but I knew I had many memories to take me back whenever I needed.