In May, my husband and I hiked behind a waterfall for the first time celebrating our 15th wedding anniversary.  Thanks to a tip by a fellow blogger, a few weeks ago we had the opportunity to visit Silver Falls State Park down in Oregon.  After spending a few days visiting a friend in Eugene, we were looking for a day hike as we headed north back towards Seattle.  This was our chance to see several waterfalls from all different views just outside of Salem, OR.

From the moment we arrived at this very popular state park I was impressed.  Parking was plentiful even on a beautiful, sunny Sunday.  Even though large groups of people filled the park, it didn’t fill overcrowded.  The dramatic landscapes surrounding the many waterfalls were easily accessible with well maintained trails throughout the park.

Hiking the Trail of Ten Falls was magical with each waterfall having its’ own unique qualities.  We had to cut our time short on the trails due to time constraints, only allowing us to visit seven of the ten waterfalls.  I guess we’ll have to go back one day and see the rest! 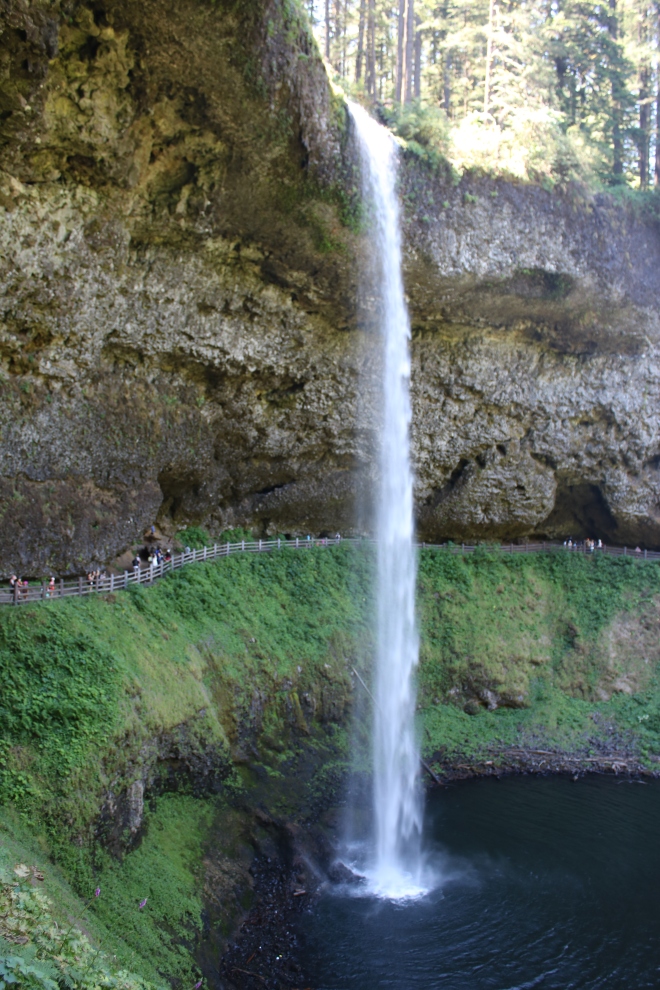 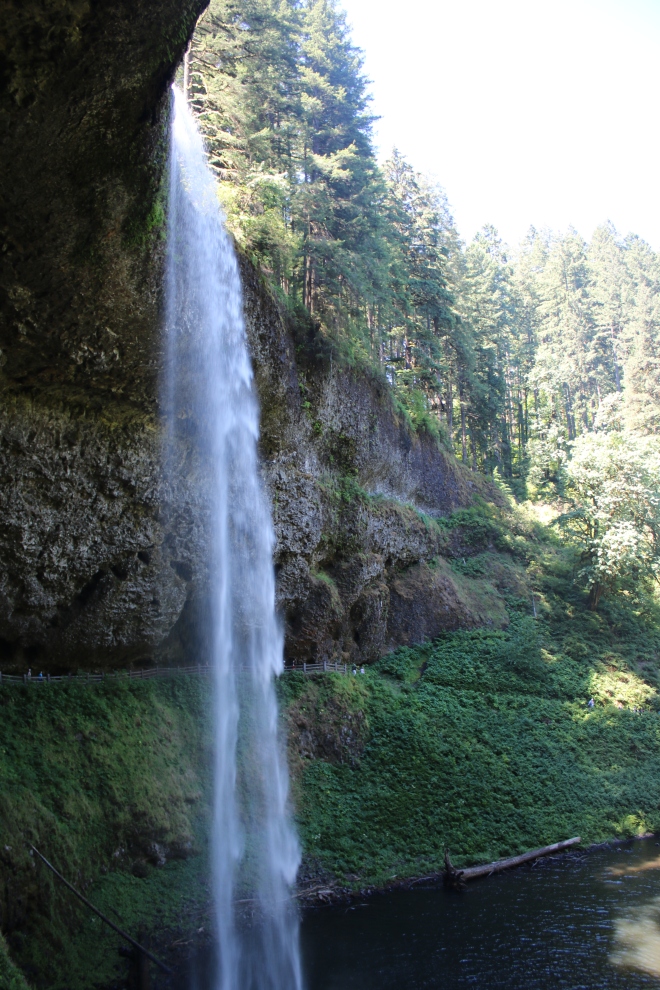 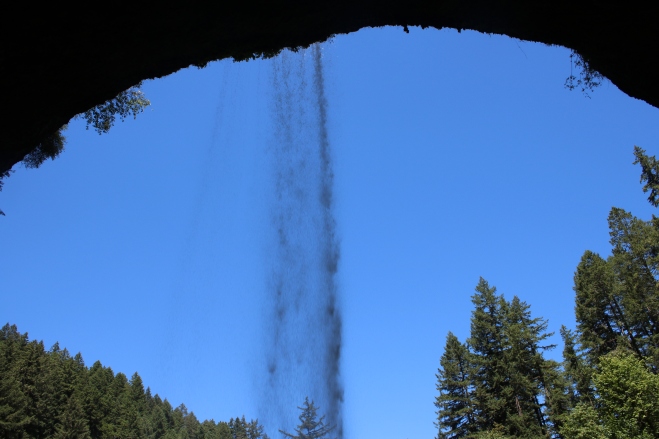 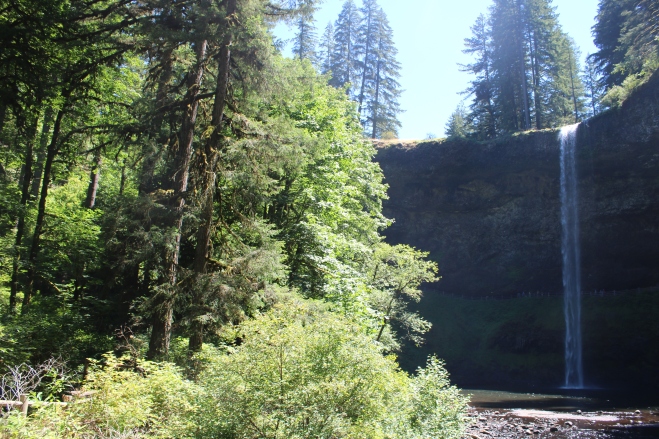 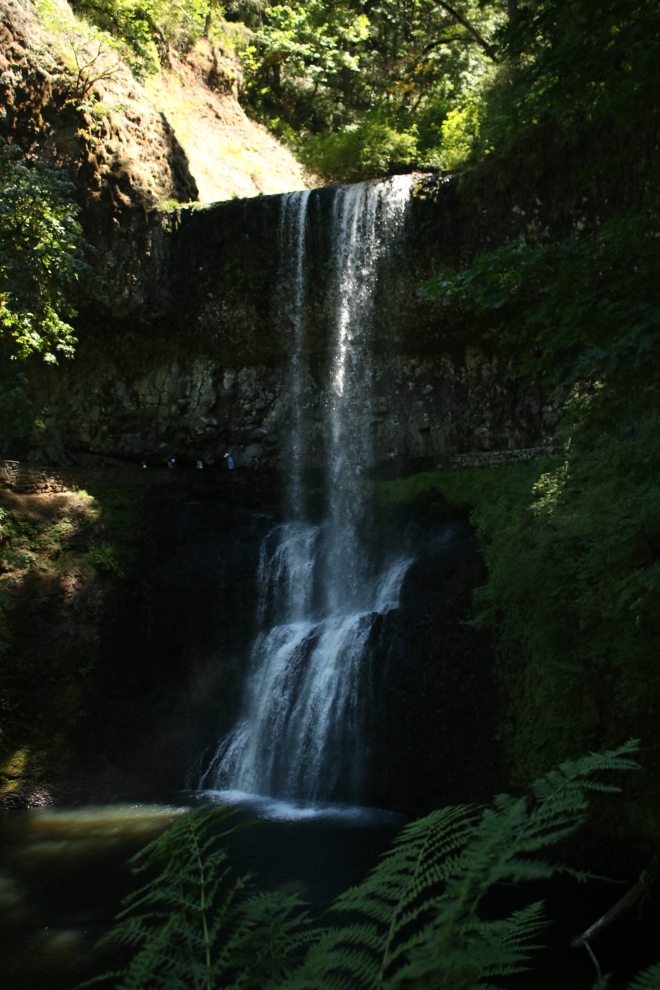 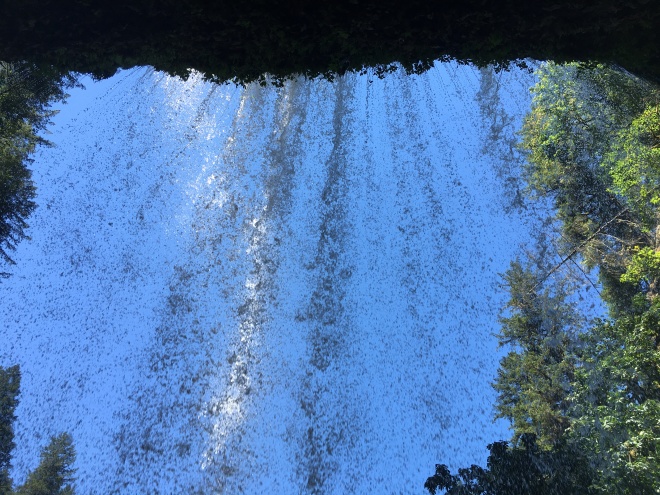 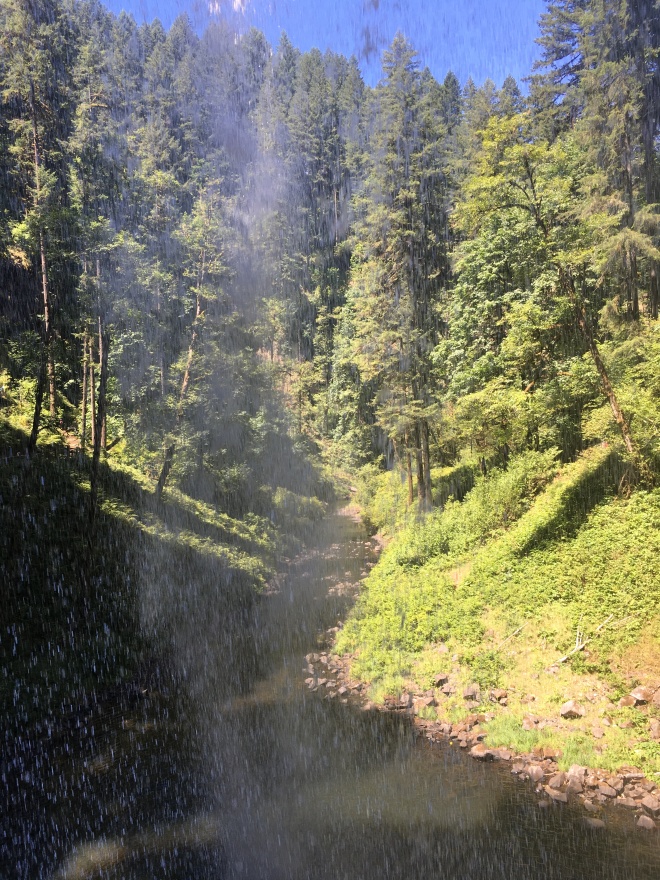 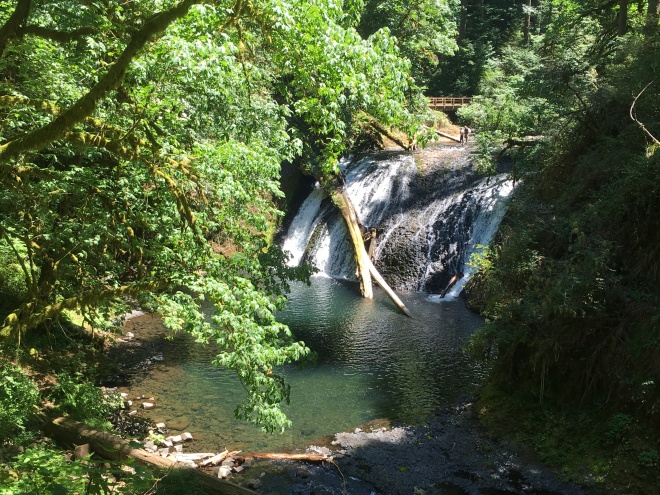 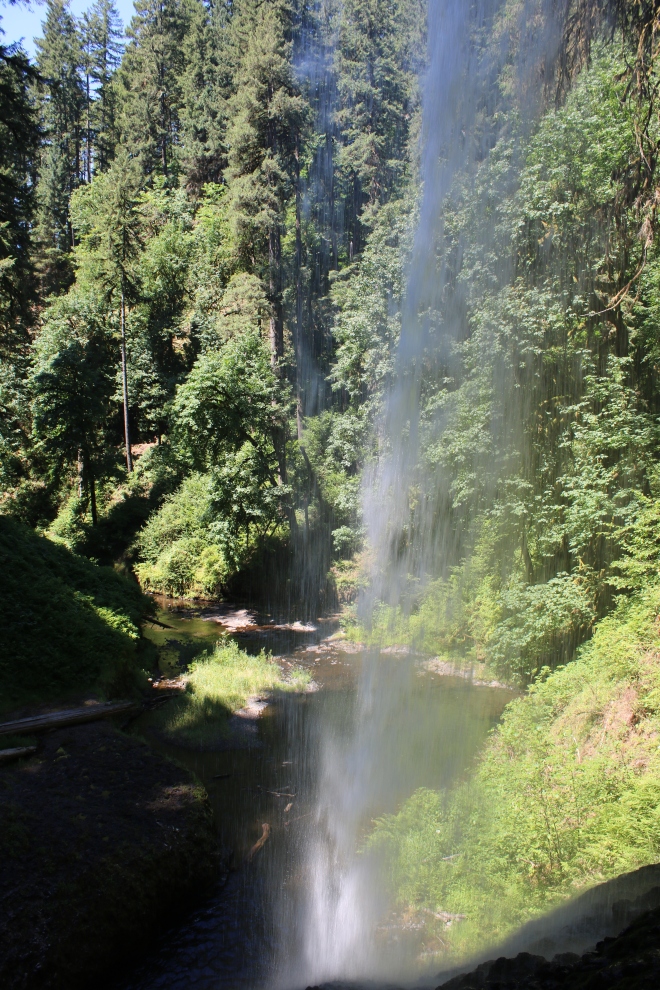 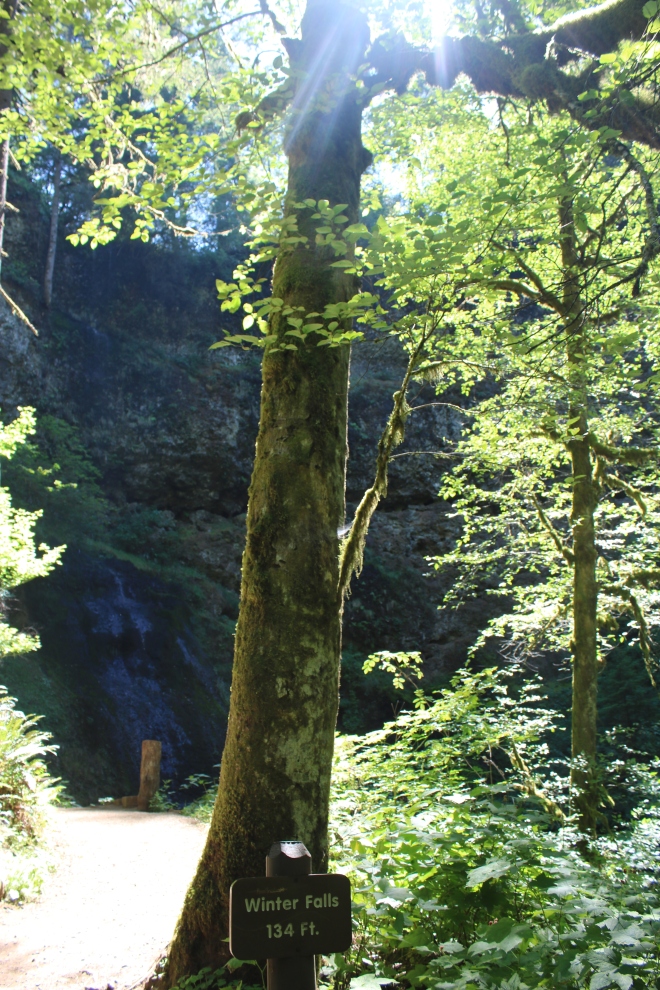 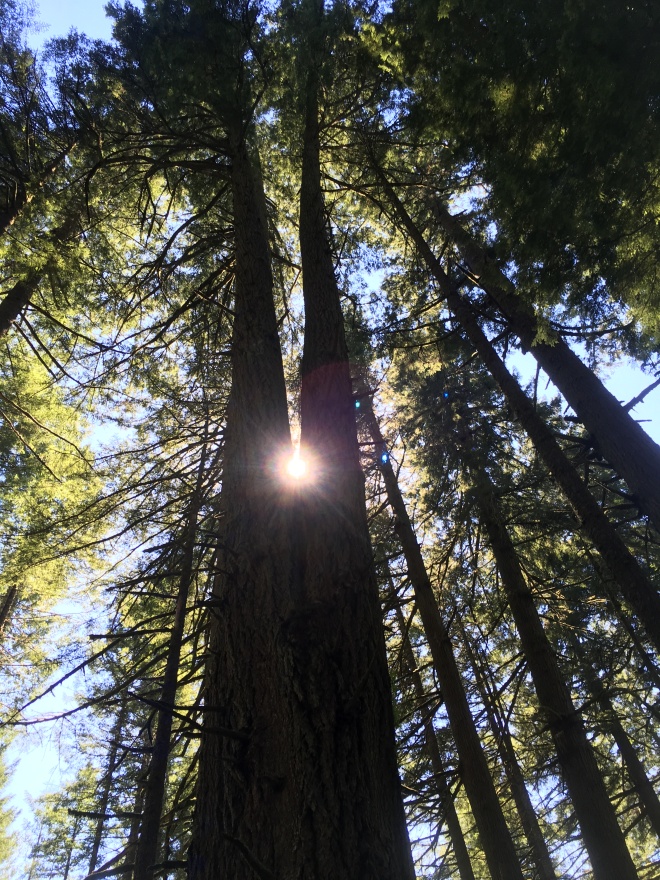 A view from behind Lower South Falls, Silver Falls State Park, OR

Last month my teenage nephew visited from Texas and I wanted to take him on his first backpacking trip.  I knew that Shi Shi Beach would be the perfect destination for a first timer.  We left Seattle as the sun was rising with hopes of arriving at the coast in the late morning.  As we drove closer to Neah Bay, the weather grew dreary with cloud filled skies.  The beginning of this journey was looking very similar to my first trip to Shi Shi Beach earlier this summer.  When we arrived at the day use parking area, I knew we’d be hiking in the rain once again.  After dropping off my nephew with all of our gear at the trailhead, I parked the car at the nearest private lot and walked back. 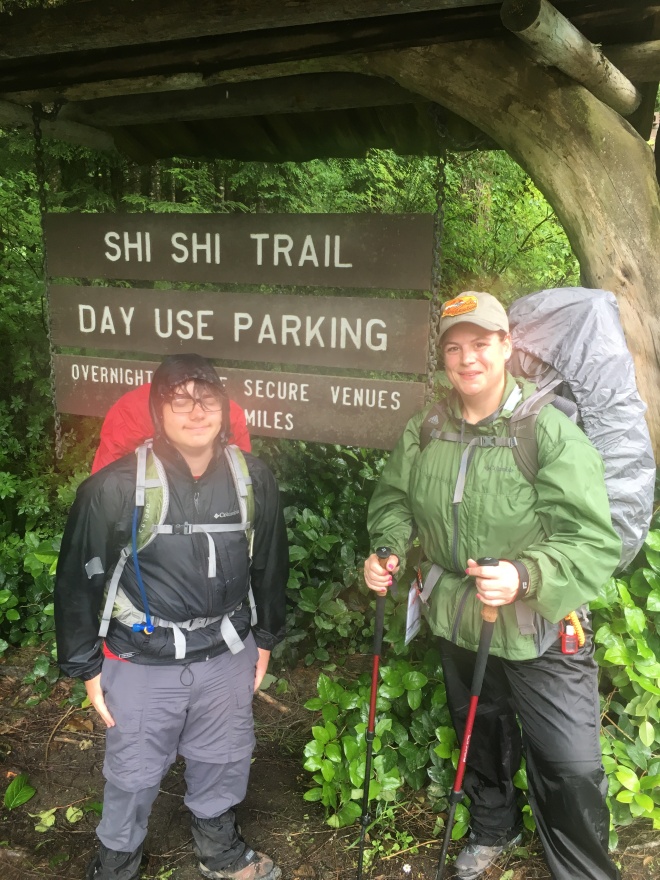 My nephew and I at the Shi Shi Beach trailhead, Olympic National Park, WA

We hit the trail in the early afternoon and enjoyed splashing around the muddy puddles along the way.  It wasn’t long before we were done tromping through the mud before we arrived at the section of the trail that heads down towards the beach.  Even though I had hiked this section before, I was nervous about the additional weight I was carrying.  While I usually only carry around 25 pounds, this time I was carrying twice as much!  I powered through the anxiety and cautiously made my way down the trail.  All of my anxieties of the steep trail were washed away instantly as we stepped onto the beach.  The rain had stopped and left the sky filled with clouds.  The two of us hiked along the shoreline of the beach with plans to camp closer to Point of the Arches.  After crossing Petroleum Creek, we looked for a spot to set up camp on the beach close to our water source.

The sunsets at Shi Shi Beach are what called me back to visit once again.  I loved having the opportunity to share the experience with my nephew.  I spent over an hour of that evening attempting to build my first fire on my own.  All of the wood was soaked from the days’ rain, and it wasn’t long before I gave up.  Exhaustion from a day of hiking drove us to  the comfort of our tents early that night.

The next morning I was wakened by the sun warming my tent.  I let the teenager sleep in while I enjoyed my morning coffee and read a book.  I enjoyed the solitude, but was happy when my nephew finally crawled out of his tent.  I was excited to explore Point of the Arches and farther south down the beach.  After breakfast, we packed a lunch and headed out for a day of beach hiking.

My nephew and I with Point of the Arches, Shi Shi Beach, Olympic National Park, WA

View from Point of the Arches, Olympic National Park, WA 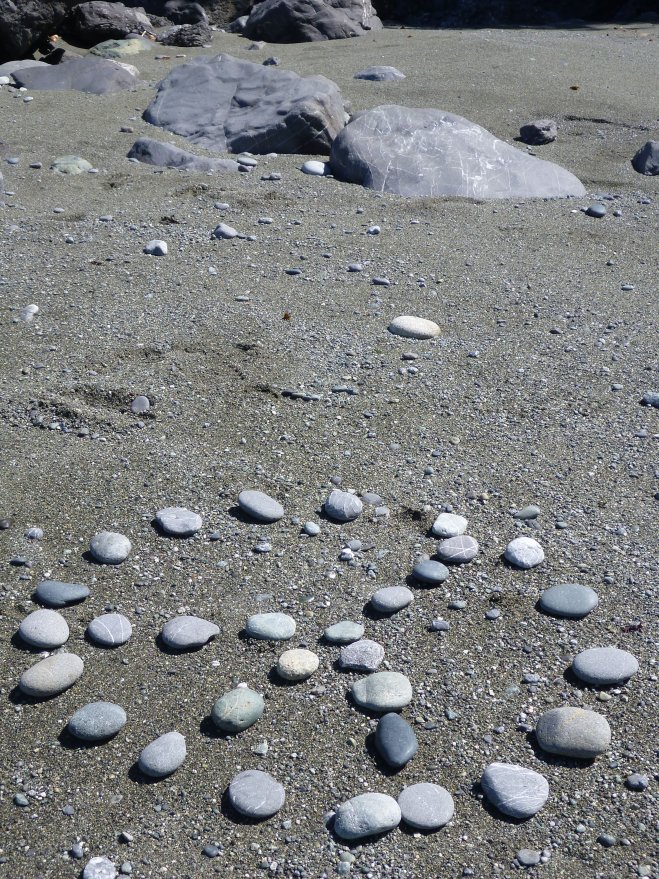 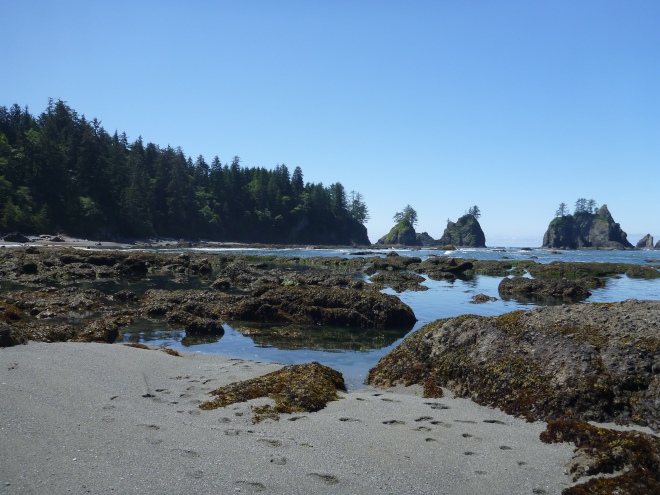 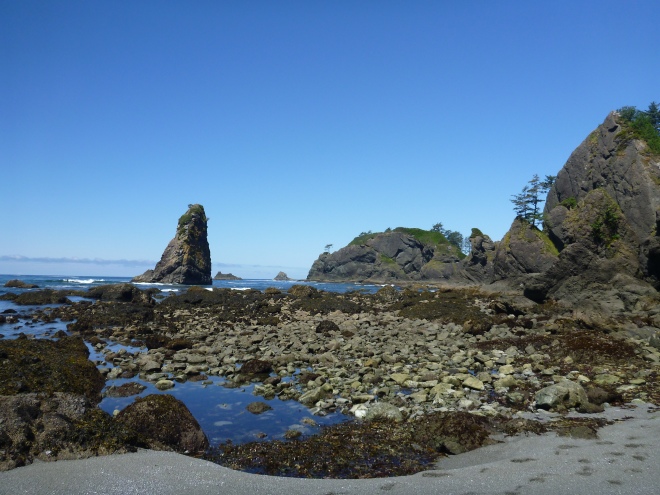 After exploring the beach south of Point of the Arches, we headed towards a picnic spot in the shade near an arch.  As we were getting ready to unpack our lunch, we noticed an eagle flying along the beach.  It appeared to be fighting with another bird as it made its’ way along the shoreline.  It landed on a rock and we noticed feathers flying all around it.  That’s when we realised the eagle was preparing its’ lunch as well.  After we enjoyed our picnic, we took off our shoes and explored the tide pools in our bare feet.  The feeling of the cool Pacific Ocean and sand between our toes was welcoming on a hot, sunny day. 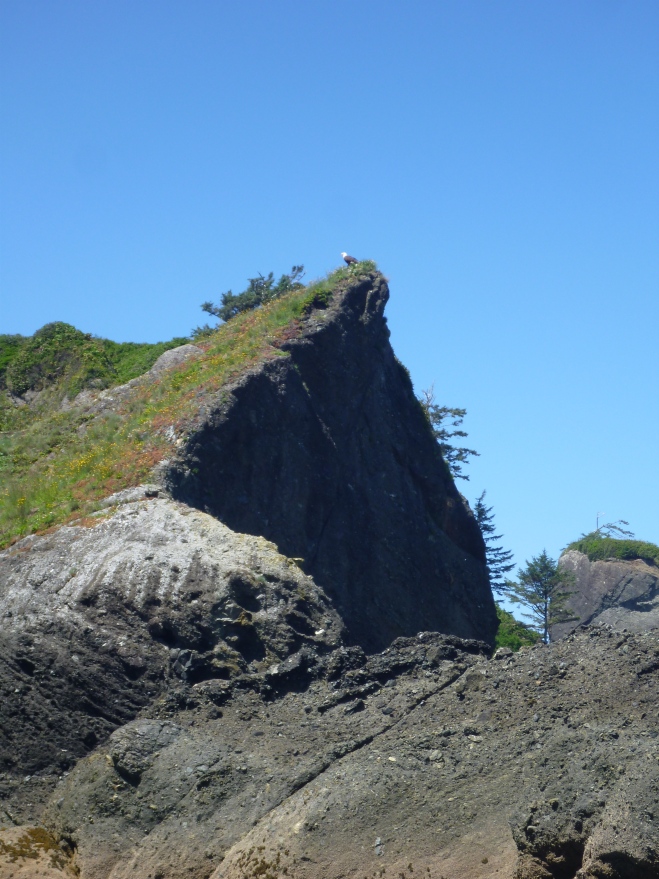 We arrived back at our campsite in the mid afternoon, and we decided to relax beside Petroleum Creek in the shade.  I read a little more of my book while my nephew took a nap by the creekside.  Once he was rested, we played a few games including bocce ball and Pass the Pigs.  We finally peeled ourselves away from the shaded area among the trees and headed back to our sun filled campsite.  After dinner I was determined to make a fire after the previous nights’ failure.  I spent another hour trying to build a fire without success.  I had almost given up, but after one last try – I finally made fire!  As the sunset and the temperatures dropped we enjoyed the warmth of the fire into the late hours of the night. 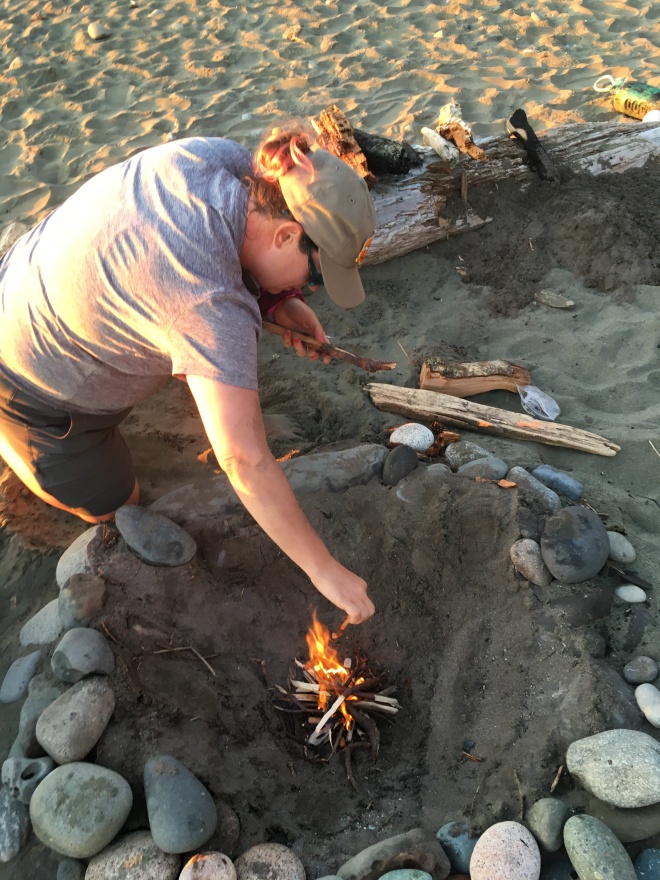 The first fire I have ever made by myself!  Shi Shi Beach, Olympic National Park, WA 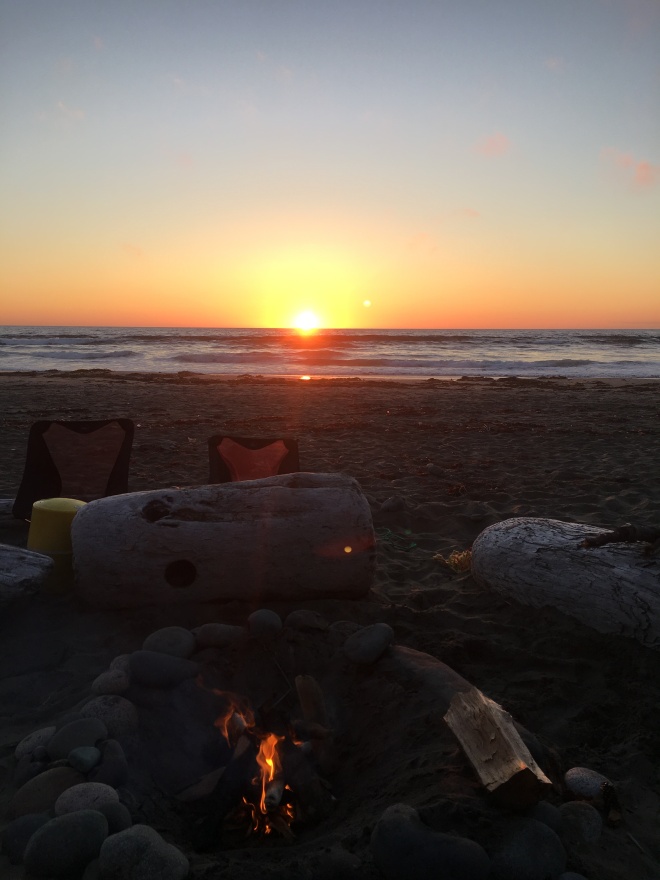 We woke on our last morning to a cloudy, misty day.  We decided to wait for breakfast once we got to the tree covered area of the trail, and packed up as quickly as we could.  As we packed, everything was damp and sandy.  Even though I was happy to hike under a cloud filled sky since the previous day had left me slightly sunburned, the rain was not welcomed. 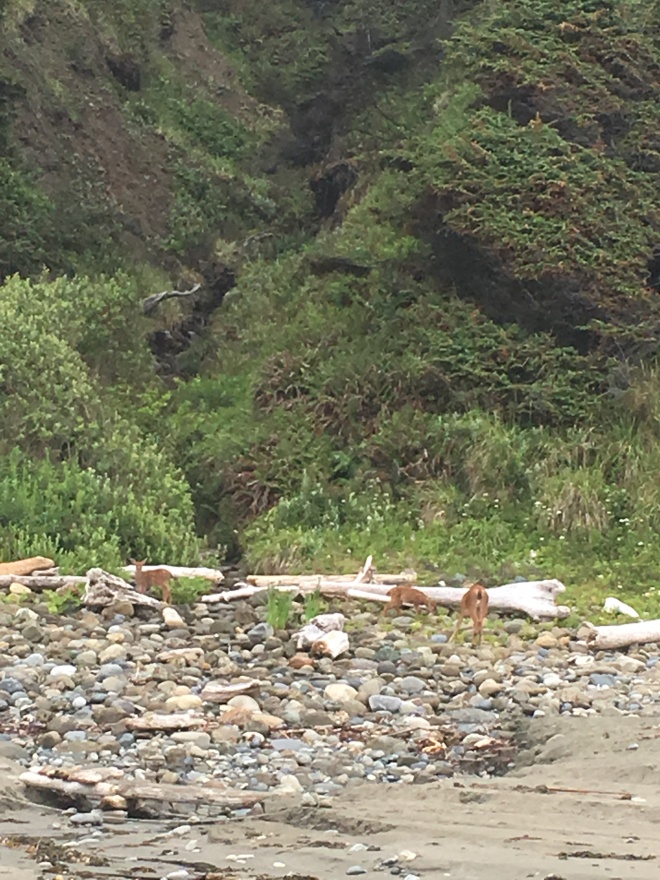 Looking down the trail back towards Shi Shi Beach, Olympic National Park, WA

We crawled up towards the forested section of the trail, and were happy to have our feet on solid ground.  Two days of hiking on the sandy beach had exhausted certain muscles in my legs.  The last two miles back through the muddy trail seemed to fly by, and in no time we were right back where we had started two days ago.  As we loaded up our gear into the car, the skies were opening up once again.  The drive home along the Pacific Ocean and the Strait of San Juan de Fuca was filled with blue skies and good conversation with my nephew.  I hope this is a trip he will never forget; I know I won’t.

My Tweets
TamarasCameras
Blog at WordPress.com.