With another long holiday weekend coming up, my husband and I were looking for another backpacking trip to get away from the fast paced city life.  Even though we had already been to the North Fork Skokomish River before, we knew there were many more trails in the area left to explore.  We were seeking out a location to set up a base camp for a few nights and explore the nearby trails via day hiking, and the North Fork Skokomish was just the place.  With hopes of clear skies and opportunities for night photography, I packed up my DSLR and a few lenses in addition to my normal 25 pound pack.  Just like our last trip, we headed towards the Olympic Peninsula late in the evening after my husband got off work.  We enjoyed our stay at the Glen Ayr Resort during our last trip, so we made reservations once again.  After taking a ferry from Seattle late in the evening on Thursday before the Independence Day holiday weekend, we arrived at our home for the night on the banks of the Hood Canal.

We woke early on Friday morning in the comfort of our hotel room and loaded our packs with the last few necessary items for a few nights in the wilderness.  We stopped at a local favorite restaurant, The Tides, for a filling breakfast before heading into the Olympic Mountains.  With the hopes of beating the holiday crowds, my husband took a day off work allowing us to arrive at the Staircase Ranger Station on Friday morning just as it was opening.  With our wilderness permits in hand, we hit the trail along the North Fork Skokomish River with Big Log campsite as our destination.  While the Staircase campground was nearly full as we left the parking lot behind us, we felt instant solitude as soon as we hit the trail.  We were virtually alone in the wilderness and had an instant feeling of peace.

Conditions were perfect for a few nights of camping; mild temperatures, blue skies, and no one else around.  Even with the additional weight of my camera and lenses, we moved swiftly along the easy trail as it meandered alongside the river. 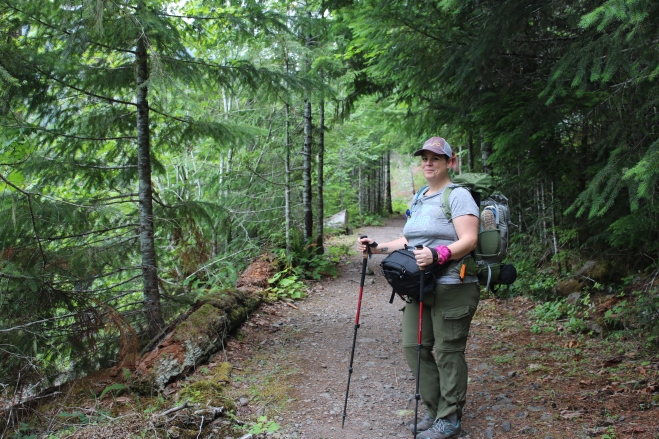 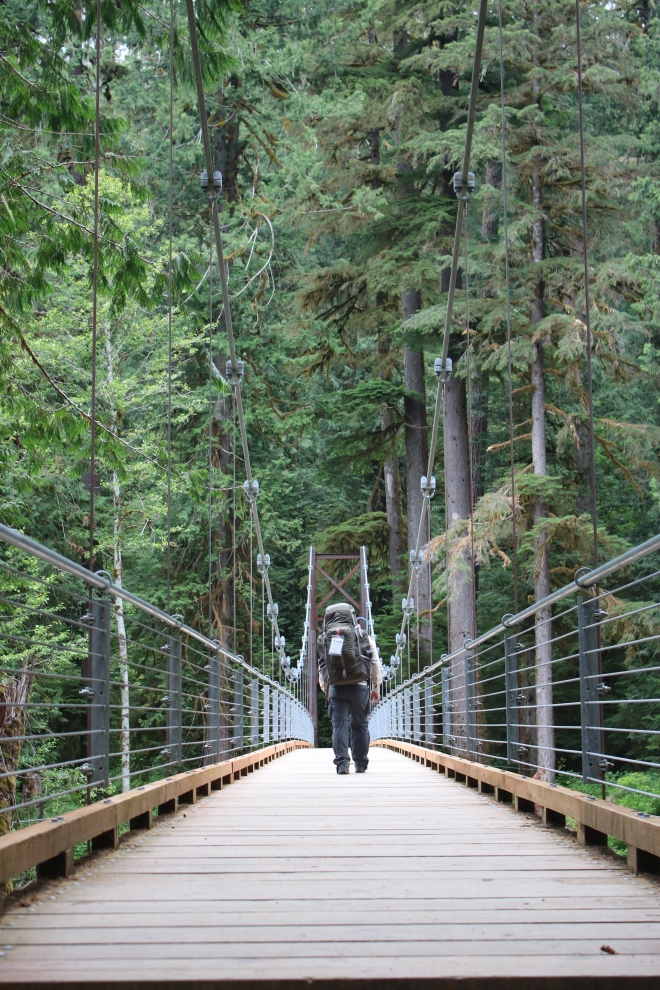 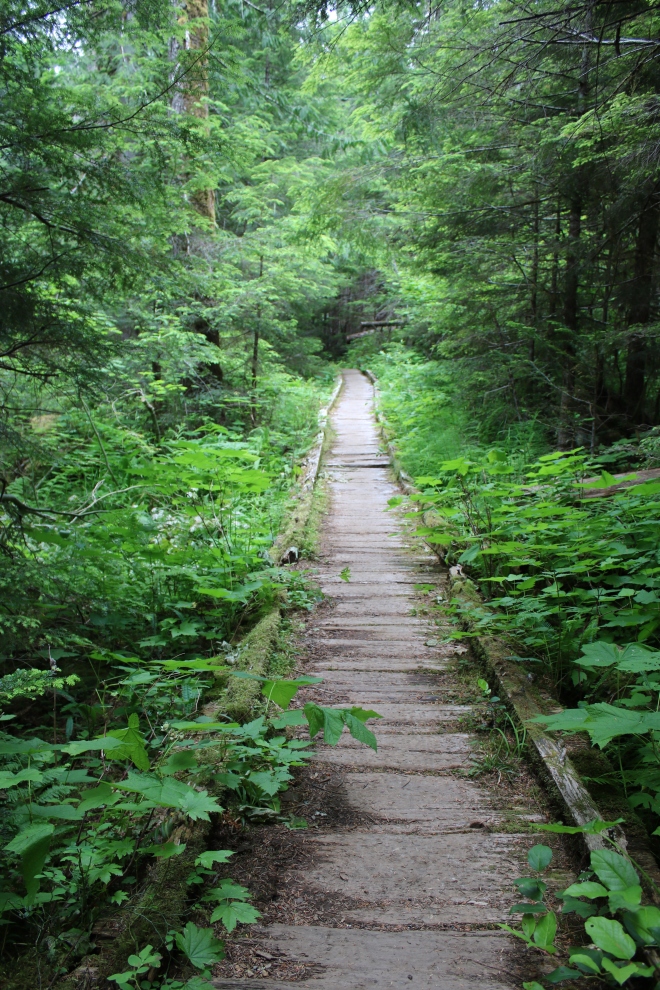 The trail slowly climbs its’ way into the valley with mountains on both sides of it.  Being surrounded by the enormous trees that made up the surrounding forest made me feel so small.  The miles disappeared so quickly as we continued our trek towards Big Log.  As we hiked along, we only passed a few groups of backpackers heading out towards the trailhead.  It wasn’t very long until we reached Madeline Creek, where trail workers were replacing the log crossing that once led the way.  The trail was diverted to the stock trail down below, where we crossed the creek upon a small log.  As we slogged uphill towards the original trail, we thanked the trail volunteers who were harnessed for safety from falling into the creek below. 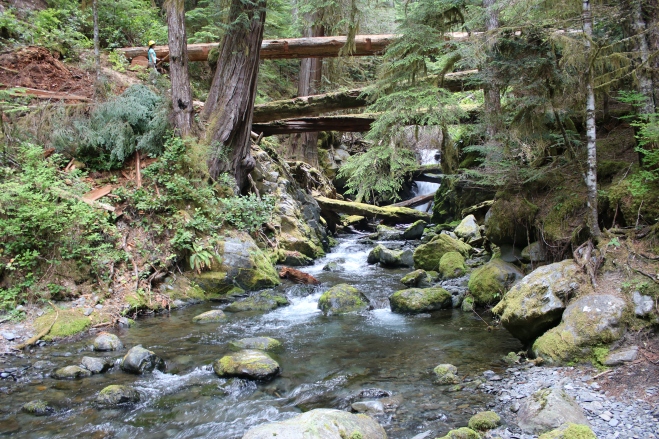 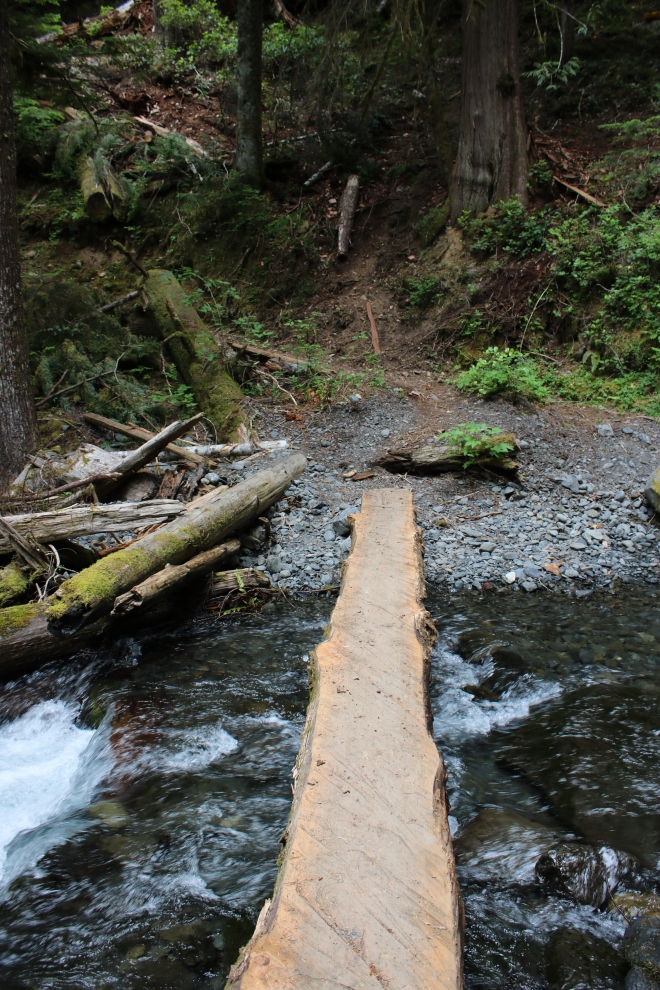 Not long after the creek crossing, we reached a sign pointing downhill towards Big Log leading us to the campsites.  We were happy to arrive so quickly and so early in the day.  After taking our packs off and a quick rest, we scoped out the area looking for a spot to call home for the next few nights.  Only a few sites were occupied, and it seemed it was the base camp for the nearby trail workers.  We picked a private spot alongside a very large log with a pre-existing fire pit.  As soon as we settled and prepared to eat lunch, we knew right away that mosquitos were going to be a nuisance.  Thankfully, my husband was able to quickly throw together a smoky fire that seemed to keep the insects at bay.

We were all alone!  We enjoyed a lunch by the fireside in solitude.  We setup camp without the sounds of anyone else around.  We spent the afternoon exploring the riverside, gathering firewood, taking pictures, and enjoying only the company of each other and nature. 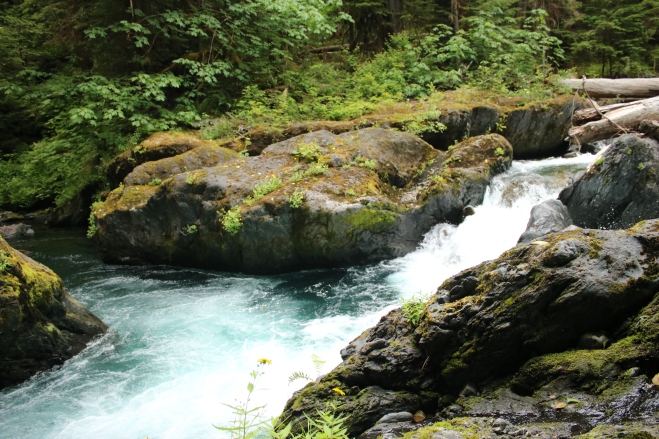 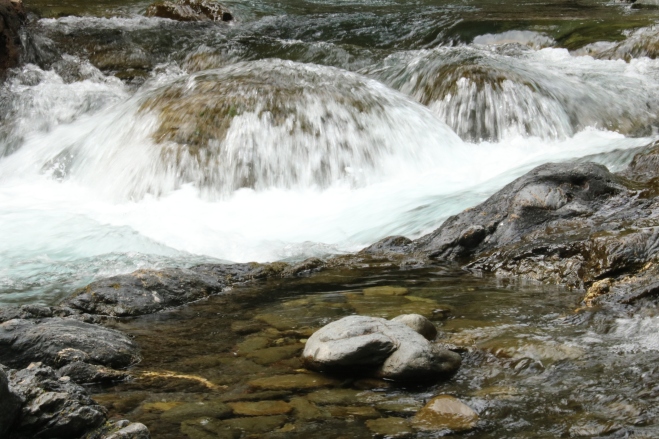 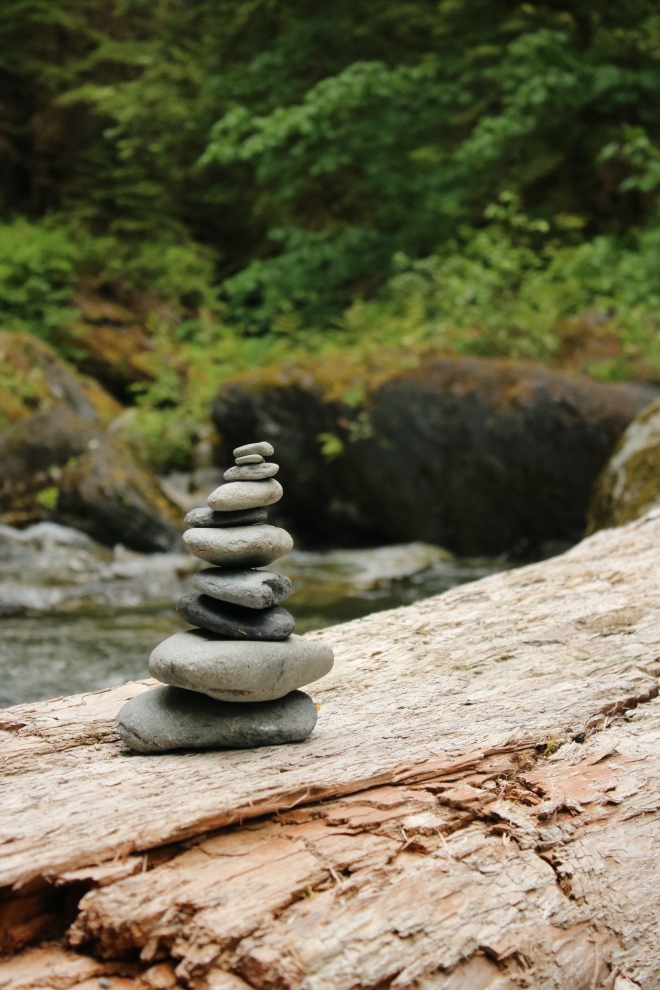 It was a beautiful day in the Olympic wilderness, which continued into the evening.  The only neighbors we had for the night were the trail workers who were camping nearby.  They must have been exhausted, because not a sound came from their direction once the sun set.  As we laid in our tents preparing for sleep, the only sounds that could be heard were the rushing waters of the North Fork Skokomish River.  That night, I had the best nights’ sleep I have ever had in a sleeping bag, on a sleeping mat upon the cold, hard ground.

After a restful night’s’ sleep, we climbed out of our tents excited to explore a new area of the park.  We enjoyed breakfast and coffee beside the fire hoping to keep the persistent mosquitos away.  Once again we were all alone at the campground since the trail workers had already left to continue their work over Madeline Creek.  We packed our daypacks and started our journey hiking towards Black and White Lakes.  We decided to take the primitive trail from Big Log towards the lakes in hopes of more solitude in nature.

This trail was tough!  Right away it starts climbing upwards and it never seems to stop.  The trail was difficult to navigate; at times it was comparable to game trails making us feel uncertain of our next steps.  The path never seemed to switch back and forth to gain elevation; instead it headed straight up the mountainside with no end in sight.  We stopped several times under shaded areas of the trail to rest along the way.  As we gained elevation and neared the top, the trees became smaller and at one point we were surrounded by flowers (beargrass.) 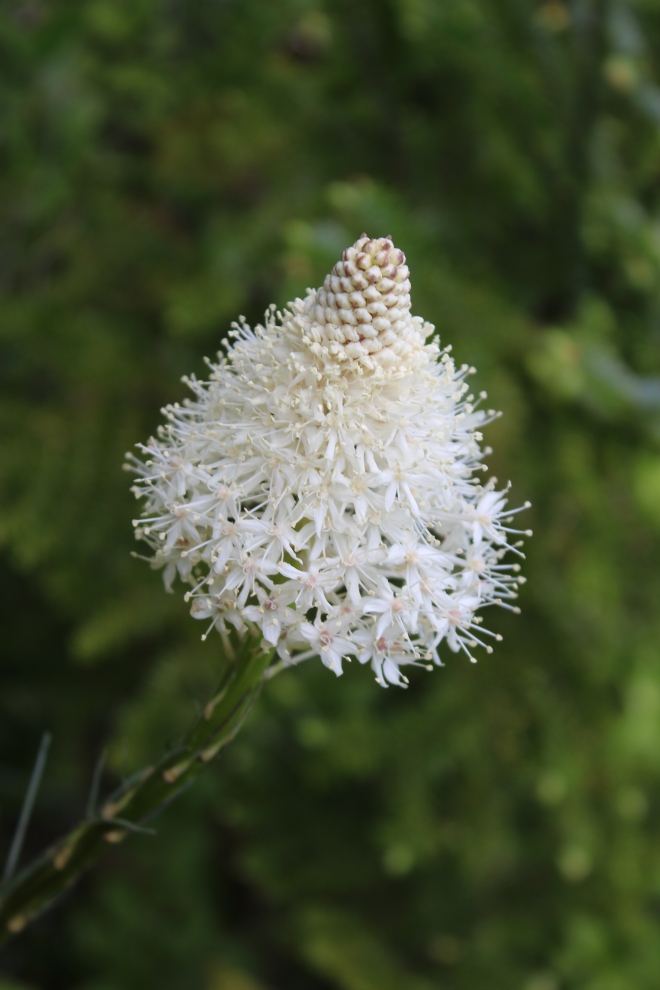 After hiking just over 2 miles in more than 3 hours, we finally reached a sign pointing us towards the lakes.  Even though we only had 2/10 of a mile to go, there was still more elevation gain left.  The panoramic views as we made the last push were just the encouragement we needed to keep us going.  As the lakes came into view, we were excited to have finally reached our destination. 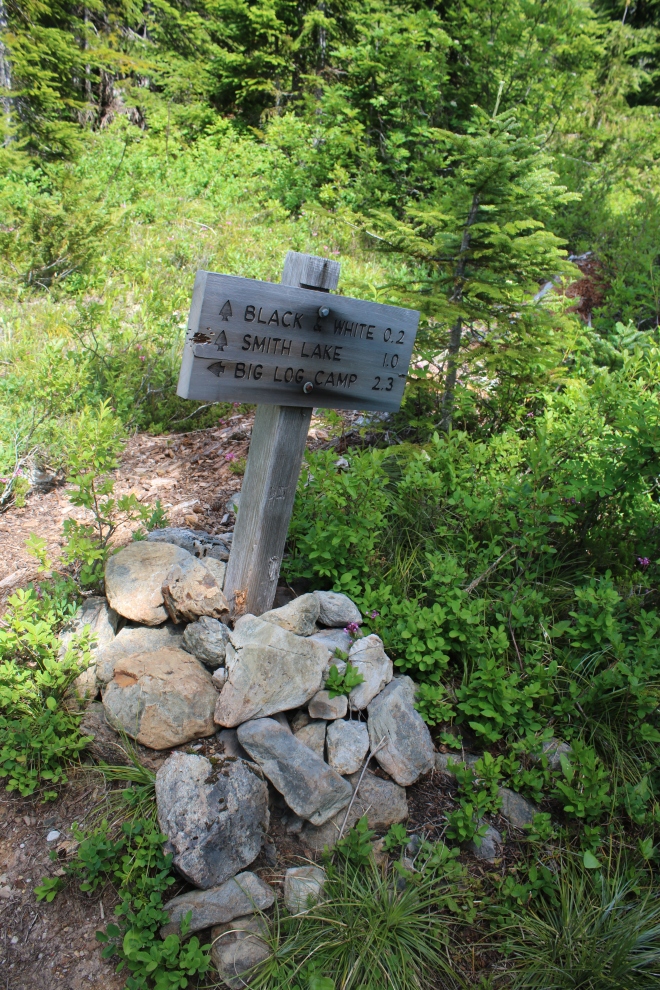 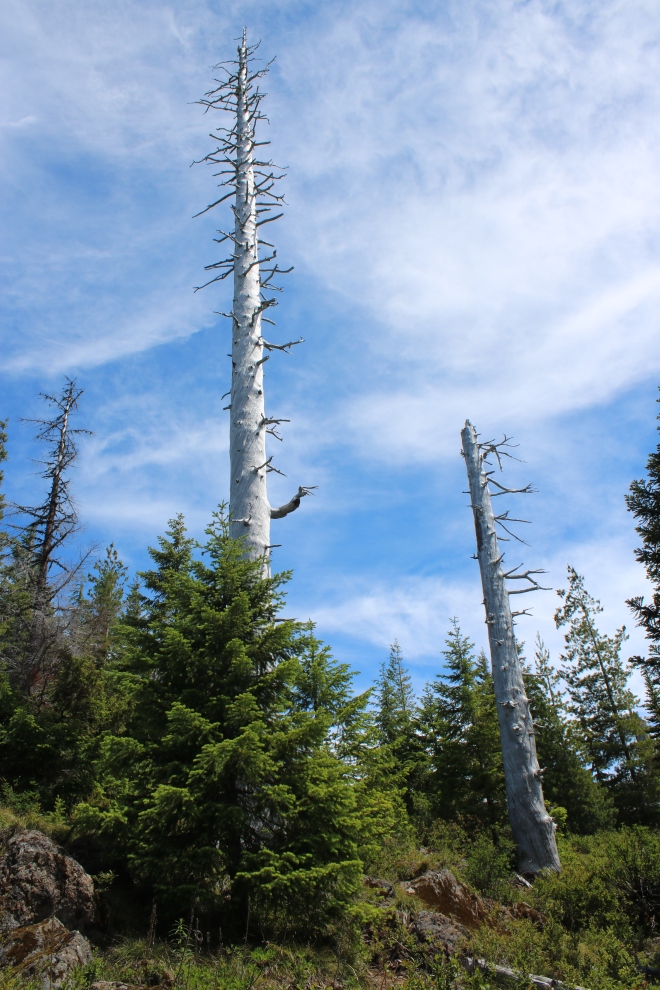 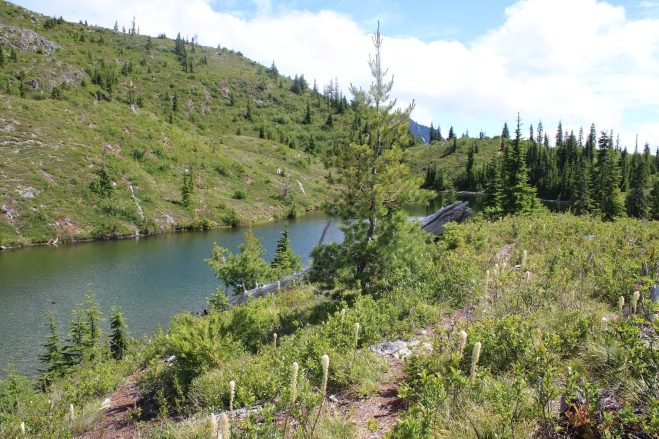 During our hike, we only passed one couple and one solo backpacker – we had found the solitude we were looking for.   After finding the perfect shady picnic spot beside the lake, we were happy to finally rest our aching muscles.  Once our bodies were refueled, it was time to cool off and clean off by taking a dip in the frigid lake waters.  We weren’t in the water long before becoming uncomfortable from the cold temperatures.  We climbed out and sunned ourselves on a log jutting into the lake as our clothes dried on a nearby tree. 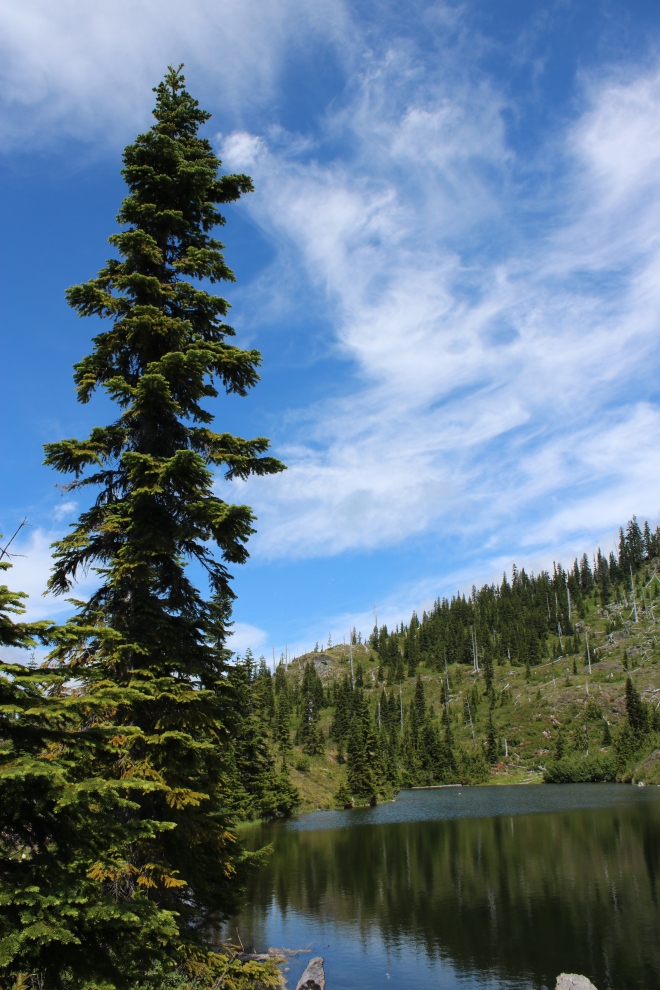 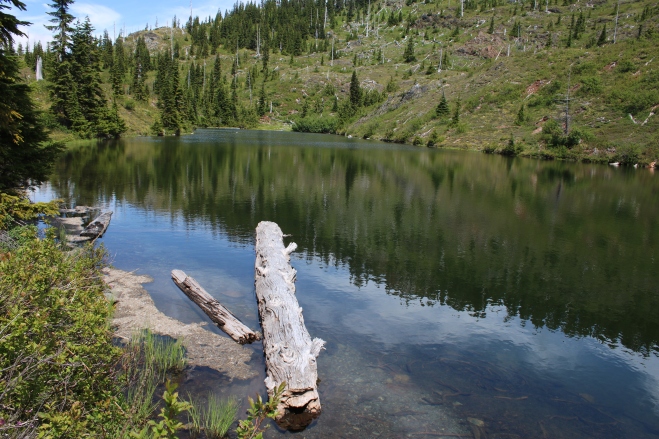 Before heading back down the trail, we explored the area around the lake photographing the surrounding beauty.  It was hard to leave the 360˚ views as we made our way back into the dense forest.

Even hiking downhill, this trail was relentless.  I was hoping to make better time during the descent, but as my toes pounded into the front of my shoes we were quickly reduced to a slower pace.  Halfway down the trail, we ran into a couple hiking upwards toward the lakes.  After short discussion, they decided they wouldn’t be able to make it out and back before sunset.  The couple decided to turn around, and the four of us made our way down the trail.  It wasn’t long before the two hikers were out of sight and we we alone on the trail once again.  As we hiked down into the valley, the sounds of the rushing North Fork Skokomish River grew louder until we were home by its’ side for another evening.  We arrived back at Big Log to a completely packed campsite, filled with lots of families.  Our time alone in the wilderness was long gone.

After dinner by the fireside we enjoyed a game of backpackers bocce ball.  We used the last moments of daylight and took turns reading aloud pages from a book together.  As soon as the sun disappeared from the valley, we climbed into our tents.  It wasn’t long before the sounds of the river assisted in our slumber on the forest floor.

We woke up early to the sounds of families playing and cooking breakfast all around us.  The sun was making its’ way through the forest trees filling the valley with warm air.  We took our as we had our morning coffee and breakfast near another smokey fire. 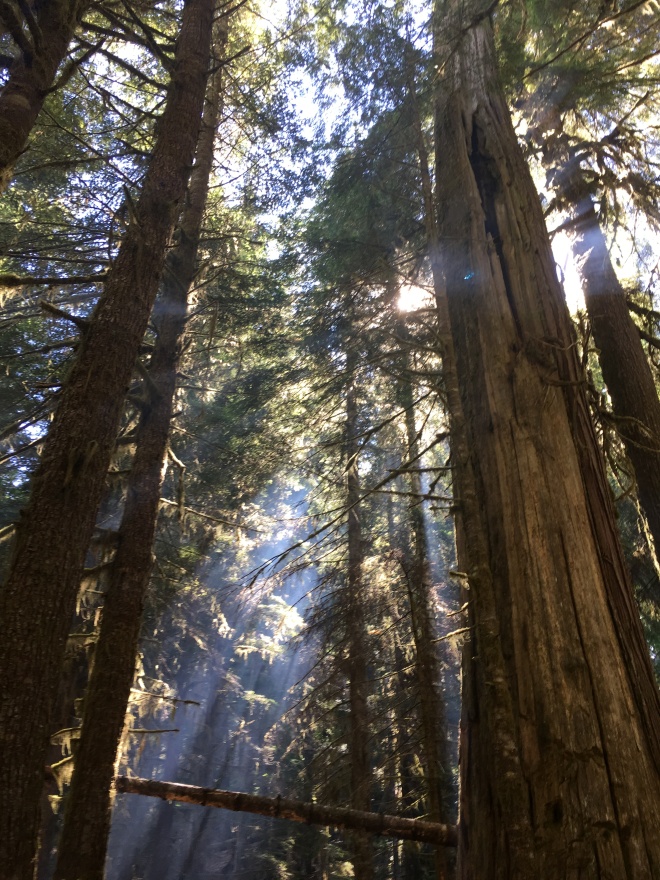 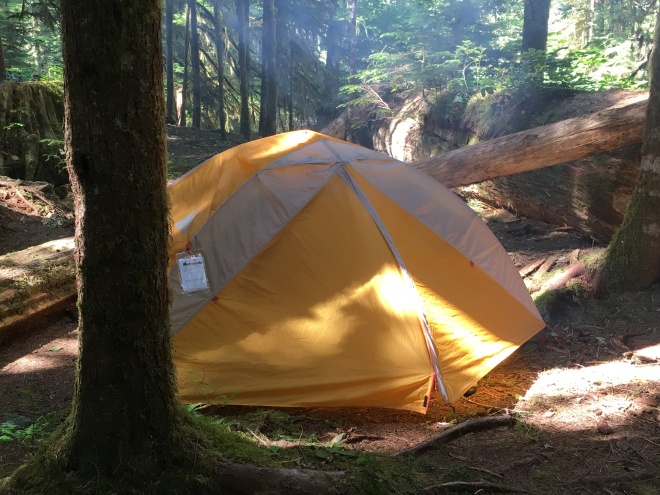 It wasn’t long until all of the surrounding campers were out for the day, leaving us alone in the wilderness once last time.  There was one last item on the agenda before we packed up our gear and headed out. My husband had been talking about jumping into the North Fork Skokomish River since the day we arrived.  With the warm weather and sunshine filling the valley, conditions were perfect for a mid-morning swim.  I watched as my husband examined the perfect spot to jump into, and soon thereafter he was plunging in!  Even the frigid waters of the river couldn’t remove the smile on his face.

With our packs loaded and on our backs, we hit the trail taking lots of memories with us.  We played a game guessing how many day hikers we would see on our way towards the trailhead.  At the end of the day, I won counting 60+ day hikers during the 5.5 mile hike along the river.

We stopped at the junction towards Flapjacks Lake and enjoyed a quick snack.  Two backpackers we had passed a mile back came limping by (one of them wearing flip-flops,) and we struck up a conversation with them.  My husband and I were so excited to meet two fellow Texans!  The brothers were on their first ever backpacking trip and were on the last stretch of a multi-day hike starting at Duckabush.  They mentioned having to hitchhike back to their car left at the trailhead days ago, and we quickly volunteered without question.  We kept our much quicker pace than the two hikers, but agreed to meet in the parking lot.  The last few miles of hiking flew by and the closer we got to the trailhead, the more packed it became with day hikers.  We arrived to an overflowing parking lot full of holiday travellers.  Our new friends arrived shortly thereafter, and we made our way along Lake Cushman and then along the Hood Canal towards Duckabush.  My husband and I enjoyed conversation about a shared passion in backpacking, and were happy to help out fellow adventurers.  The detour was welcomed as it introduced us to new areas of the park.  We dropped off the two brothers and made our way out of the forest one last time, but always knowing we’ll be back soon. 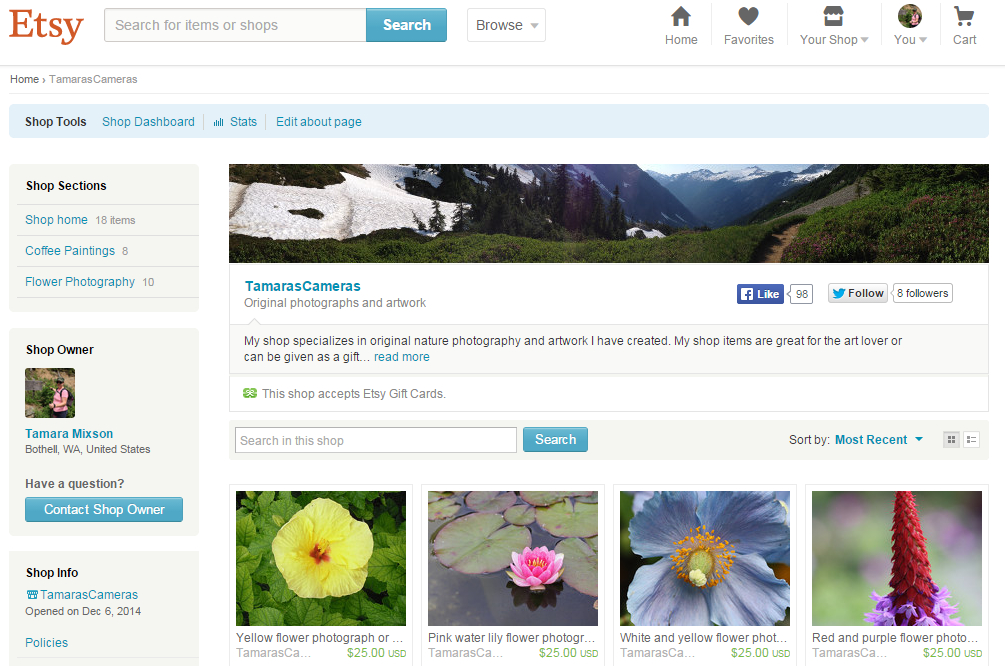